It is always nice to finish the season on a positive note so finishing the Chatanika -Two Rivers 200 in first place accomplished that, renewing our enthusiasm and belief.   The race had been postponed one week due to the impact of two feet of fresh snow the week prior to the scheduled start date.  Turns out that was a blessing for me since I was sick that week and I'm not sure I could have stood on the runners for 30 hours.  I had even suggested Devan take the team, but his back has been bothering him so he would have been no better.  So the extra week gave me time to recover my strength, something I really needed because the team was pulling the hook repeatedly as we tuned up for the race.

The race trail was gorgeous.  It started at Chatanika Lodge, north of Two Rivers, on a wide, well groomed trail.  I was on the brake pretty hard for the first twenty miles as it wound up (a lot) and down, over Domes and down river valleys between.  The views were 360 for much of the route to Two Rivers, really spectacular and I was wishing I had a camera with me.
The team composition was unique to me this season since I was running only half of my main race dogs - Weasley, Pebbles, Holly, Skor, and Muggles - and was missing most of my main leaders who were running Iditarod with other teams.  Athena, a main leader in past years and teamer Wilma (soon turning 10), had been run by my handlers most of the season.   Bolt  also had usually run with Mari and Guro and Mike and Merlin had missed out on several races this season due to chicken leg issues.  Apollo and Dusty, the only yearlings, had run all season with Tamara  so they were totally new to me.
The first two runs were nearly perfect.  We traversed the hilly trail to Two Rivers in about 4 1/2 hours and then proceeded to the Pleasant Valley store checkpoint over drifted trail, driving solidly by the home trails.  The third run was marked by sick dogs;  about half the dogs had diarrhea or vomiting, really the first time I'd seen that during a race this year.  Fortunately I had metronidazole with me and treated many on the trail but I did drop Bolt and Apollo at Angel Creek due to the diarrea.  Our last run seemed slow due to soft trail in many sections and I did worry Heidi might catch us but they must have motored along reasonably at the Weasley Wobble pace,  passing by the house for the third time and proceeding nicely to the finish line at the store.  I was very happy with all the dogs especially Dusty who finished her first 200 mile race and Wilma who proved to me she's probably not ready for retirement!
My thanks to all the volunteers of Two Rivers who put on a great race and congratulations to all the mushers who participated!
Posted by Judy at 8:59 AM No comments: 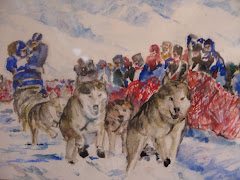